Do you know about screen free week?  Do you know that screens might be invading your life?  Think computer, smartphone, iPad, Facebook, television, and on and on.  For my part, television is not a huge part of my life.  Our family does not have a television.  Well, we have a television, but it has no TV service.  I watch plenty of Hulu and instant steaming to get my media fix, but for the most part, we are relatively TV-free.  My vice is the computer.  When the kids are awake, my husband and I have been good about keeping the computer closed, but after they go to bed, or when they nap, my screen time starts!  I love writing this blog, and following links to fabulous articles and resources in early childhood education.  But, I know I could be doing different things with my time!

So, in honor of screen free week, I will be taking a hiatus from facebook and my blog.  EEK!  Nobody say anything or do anything too important over the next week, okay?  Actually, in my time away from Facebook in the past, I know how refreshing a break can be.  So what will I do without a continuous barrage of information??  Probably go to bed a little earlier, and spend time reading the piles of books I have been excited to get to.  And maybe even hop on the treadmill. Who knows??  The options are endless.  I have a few conferences coming up, so I can’t commit to being computer free, and I will still be on email.  But, if you have gotten used to your daily dose of Abundant Life ramblings, you might notice a gap next week. I hope you can find time to turn off and unplug – I think you will find that it nourishes your soul.

It’s the Journey, not the Destination.

At Abundant Life, we are close to a city walking path that is lined with thick foliage and bordered by a creek.  We make the trek to the path almost daily when the weather is nice.  The path is about a mile long with a city park at each end and our grocery store situated near the midpoint. Our program is between the grocery store and one of the parks, so when we set out, our destination is usually the closest park or the grocery store.  On Tuesday, we made an impromptu decision to walk to the farther park and meet up with another local preschool group for a picnic.  The day was lovely, and on our way home, Tekoa spotted a duck on a sandbar in the creek.  On closer inspection, we found the female nesting among some bushes, and on even closer inspection, we spotted some tiny ducklings peeking out from under her blue wing.  I had my camera, which made it easy to share her location and the location of the ducklings with the crew.  We were a distance away, and she was well hidden among the brush.  The ducklings were only visible because they were moving under her feathers.  (You’ll have to click on this picture to make it larger – the duckling is just in front of the duck’s blue wing — the duckling has a small white stripe along it’s body.)

END_OF_DOCUMENT_TOKEN_TO_BE_REPLACED

I don’t know about you, but I can be pretty opinionated. (Nah! You? Really?)  Shocking, I know.  And I don’t necessarily like when those opinions are wrong.  And I certainly don’t like when those opinions are challenged by the crew, and I find that indeed – I am wrong.  Owning my mistakes and admitting to them is tough enough, but admitting to the crew when I’m wrong feels even more uneasy.  We live in an ends-oriented society that believes “right-ness” is imperative and that admitting error puts us at risk of manipulation.  So we do what we can to be on our guard, particularly with our children.  No, I am not weak. Yes, I know what’s best for you.  No, I am never in disagreement with the other adults in your life – we support each other’s decisions 100% and never question each other in front of you. Ever.   If there’s one thing I know, the requirement to be right all the time is exhausting, impractical, and impossible.

END_OF_DOCUMENT_TOKEN_TO_BE_REPLACED

The Wisdom to Do What’s Right (Part 2)

Yesterday, I embarked on a series about the connection between wisdom and parenting.  You might be thinking that you could jump into this post without reading from the start of the series.  I have to warn you…that would be like beginning the Lord of the Rings series during the last 30 minutes of the third movie, or entering the show LOST at season three.  Tragic, right?  Right!  Think of all you might be missing!  Whatever you do, if you missed yesterday’s post, check it out before you move on!  Read it?  Good.  You may now proceed. (Okay, so really, this whole introduction is not-so-subtly directed to my wonderful and amazing – thought not so keen on catching ALL of a series – brother, Bryan.  Can you believe him?  The last 30 minutes of LOTR?  Missing season 1 and 2 of LOST?  The nerve.  Feel free to give him a stern talking-to in the comments below.)

END_OF_DOCUMENT_TOKEN_TO_BE_REPLACED 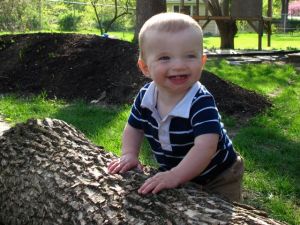 We are bodies born bursting with wisdom.  Even though as babies we are entirely incapable of taking care of our needs, we have the wisdom to recognize those needs and signal for a little help (that comes in the form of well-intentioned but oft miscalculating parents, grandparents, neighbors, and friends).  And over the span of a few short months, we formulate an entirely unique communication pattern of body movements and vocalizations – tailor made for the care providers in our lives – that do a little bit better job of indicating hunger, thirst, or a full bottom end.  Somewhere between infancy and adulthood, the confidence fades, and although a full-out-fatigue-induced cry is not socially appropriate for an adult, many of us are too disconnected from our own wisdom that even if we had license to make use of our lungs, we wouldn’t know where to start.